Solar energy is the future. Electricity generated by fossil fuels and nuclear energy is harmful to Earth. Fortunately, slowly but surely, people are understanding the benefits of Solar energy and shifting towards it.

In this article, we will explore the process of choosing the right hybrid solar inverter. Make sure to read until the end to make an informed decision.

We will focus on hybrid solar inverters; however, this article is your ultimate guide for choosing a suitable inverter for your system.

What does a solar inverter do?

Before we dive into selecting a suitable hybrid solar inverter, here is some information about its working.

As you probably know, solar panel cells generate direct current (DC). A hybrid solar inverter converts this DC into AC energy. Electrical energy from natural wind to alternating current is transferred into the grid or power a building, which runs on alternating current.

When designing a solar power plant and choosing an inverter, you should consider how much direct current the solar panel will produce and how much alternating current the inverter can output (its rated power). This information will help you select a suitable hybrid solar inverter.

Importance of the size of a solar inverter

The size of a hybrid solar inverter is significant because it should be able to handle the current from the solar panel system. The installation guide for solar systems/services comes with guidelines, and it is the supplier’s responsibility to educate the customer about the reliability of the hybrid solar inverter power supply.

Determining the size of the solar inverter

Solar inverters of different sizes are available in the market. An average consumer would need clarification about these sizes and know which one to pick.

Solar panels are rated in watts. Likewise, solar inverters are measured/sized in watts as well. The solar system will generate DC and transfer it to your inverter. The inverter handles the solar system’s load and converts it to AC. This is the central role of an inverter which makes it so essential.

However, in more detail;

The size of the inverter will play a significant role in the overall output. Inverters come in different sizes.

As we mentioned, like solar panels, a hybrid solar inverter can be sized in watts (W), kilowatts (kW), or kilovolt-amperes (kVA). kVA is apparent power; as a rule of thumb, the kW power is around 80% of kVA. Therefore, an inverter rated at ten kVA equals an 8 kW inverter. Generally, the inverter can withstand the final strength with a limited duration of approx. 1.8 times the inverter.

If the size of the inverter is involved, the installation program will take into account the two main factors:

Factors affecting the size of inverter for solar panels

Here are some factors that determine the size of your inverter for your solar power system.

The influence of geography on solar energy production plays a critical role in sizing solar inverters. Areas with high temperatures are expected to receive much solar radiation. Therefore, this type of region produces more electricity than a low-temperature region.

These zones differ in temperature and solar radiation; they will produce different amounts of DC at a given time. Under typical weather conditions, the hybrid solar inverter can have maximum power at the specified DC rating.

Another important factor to consider is location. The size of the solar PV inverter is affected by the design of the solar array and the installation area. The tilt of a solar panel directly affects the amount of electricity produced. Other weather conditions, such as dust or humidity, can also easily affect the energy production of solar panels. These are the main factors that affect the path of sunlight to the array. Installing solar panels increases the efficiency of the equipment to overcome these obstacles. However, these factors can affect the production of electricity.

For example, in a 6-kilowatt solar system, the inverter should be rated at 6,000 watts, up and down a few watts. Inverter size requirements are listed on the solar panel data sheet as well. The power that the inverter can handle is also listed here. Always remember that using the right size reduces the warranty plan.

In addition to array size, building size, and location, several other factors related to the specific array location and design can affect the size of the inverter required. For example, the tilt and orientation of the panels about the sun will significantly affect their productivity.

In addition, many environmental factors can affect the amount of sunlight in the impact panel. These may include the number of shadows (i.e., from trees or adjacent buildings), dust or pollution levels in the air, etc. 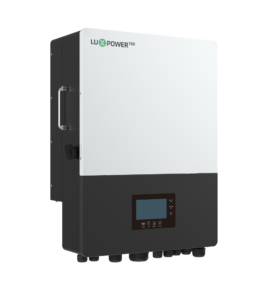 All the main functions of solar and battery storage in a straightforward plug-and-play inverter mean that solar hybrid inverters are generally cheaper and more affordable than more complex battery storage systems, which usually require multiple inverters. Easier to install. However, they have some limitations and are generally not recommended for off-grid solar cells. 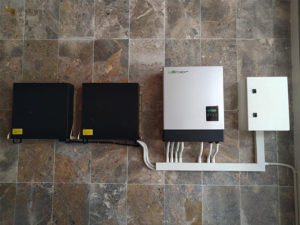 These inverters can also back up heavy loads such as air conditioners, pumps, and heaters. Many of these advanced multi-mode off-grid inverters also have very high-power throughput, eliminating the need to separate base and non-base loads. 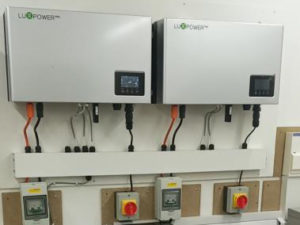 The solar power inverter is connected to the grid. An on-grid solar inverter is a photovoltaic system that converts direct current (DC) from solar panels into alternating current (AC), which can then be used on your property or fed into the grid system. This electricity can then be transferred to another consumer as well.

The on-grid solar inverter works with a grid-metering system. The current generated by the solar panels in the form of direct current is converted into alternating current with a voltage and frequency that matches the grid system so that it can be fed into the grid when needed. The owner first uses the electricity converted by the inverter; if the current is too high, it is sent to the national grid for use by other consumers. Grid metering systems register electricity consumers and deliver it to the grid.

What is the best hybrid solar inverter?

Although there are many suitable inverter types in the market, it is hard to pick one as the best;

MPPT solar hybrid inverter is arguably the best hybrid solar power inverter available in the market. It maximizes the energy available from the connected solar system at any time during its work.

Advantages of a Hybrid Solar Inverter

The type and size of the inverter depend on many factors and will vary from case to case.

In short, if you consider all previously discussed factors, talk about the recommended inverter with the installer, and roughly match the size of the inverter with the matrix capacity, you will make a perfect decision.